The Harbour Esplanade redevelopment has seen key areas of public space transformed into a major waterfront destination, creating a unique harbour-front park for Melbourne completing the city’s inner ring of parks. The new green spine will also better connect the precincts within Docklands.

The first stage of works, between Bourke St and Docklands Drive, has seen the creation of a tree-lined boulevard, dedicated bike and pedestrian paths, and the realignment of tram tracks into the road- way to provide additional parkland and recreational space.

…what we did on this project

The redevelopment of Harbour Esplanade at Docklands is a project that has transformed the CBD fridge and provided improved ambience and accessibility to this area
This was a fully funded project delivered for Public Transport Victoria (PTV) on behalf of VicUrban that has transformed Harbour Esplanade into a destination and has provided a great connection between the city and Docklands precinct.

The construction works where split into two separate contracts, light rail works and the road works, both of which were delivered in parallel forging a strong interface between the two contractors.
Urban design, traffic engineering, signalisation and other road interfaces had to be carefully managed to ensure that project delivered on all its objectives minimising the impact to the local community and business.

The high profile of the many large and small business based in the Docklands precinct increased the sensitivity and importance of this project across government and transport agencies alike.

The stakeholder and the community engagement strategy that was developedwas crucial to the successful delivery of this project. The programme of works was developed taking consideration feedback provided by the stakeholders considering their operation requirements. One of the main challenges in this projects was to meet the programme millstones while maintaining access to all business minimising impact to their day to day operations.

The scope of the light rail works included the following:

This project was delivered on time and within the agreed project budget. 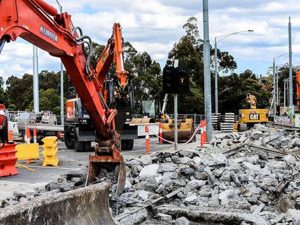