Repainting of the Steel Deck of West Gate Bridge

The West Gate Bridge is a steel box girder cable stayed bridge in Melbourne that first opened to traffic in 1978. The total length of this bridge is 2,583 metres and spans the Yarra River from Yarraville across to Port Melbourne.  just north of its entry into Port Phillip, and is a vital link between the inner city and Melbourne’s western suburbs. The river span is 336 metres at its widest point, and the height above the water is 58 metres. The total length of the bridge is 2,583 metres.

The area that that is being painted is the steel section of the West Gate Bridge and is approximately 848 metres long, comprising of 54 steel boxes split into two areas, East and West. These boxes are marked located between Pier 10 and Pier 15.

The steel bridge is accessible by an Alimak located at Pier 15. The Alimak is a lift that transports personnel from the ground to the underside of the steel superstructure, a series of stairs, ladders and suspended walkways then provide access into, and underneath, the steel bridge.

The majority of the steel section of the West Gate Bridge is supported by cables that run over two towers situated above Piers 12 and 13. The towers carry a significant portion of the total dead weight of the superstructure. The towers are constructed of six welded 2.44m square shaft sections sitting on a trapezoidal section and topped with a saddle section.

The Steel Section of the West Gate Bridge has two paint systems:

Internal Paint System: The internal paint system is made up entirely of red lead primer and is applied to all internal steel surfaces. The lead paint is hazardous in nature and is not to be disturbed. Works that may disturb the paint in any way require special approvals before works can proceed.

Any inspections undertaken by engineers or inspectors fall within the confines of the internal walkway system do not require coveralls to be worn, any new steel installed into the interior of the steel bridge is coated with a zinc rich primer.

External Paint System: The current coating system on the exterior box section of the bridge steelwork and the cantilevered sections consists of a zinc hot metal spray primer with multiple coats of chlorinated rubber that was applied soon after the West Gate Bridge was constructed in the early 1970s. Some areas of the bridge may have zinc rich primer and other systems of varying composition, coating sequence and film builds may well be present.

The works we are overseeing over the course of the next few years will see the Steel Bridge repainted with a new four coat system comprised of a zinc rich epoxy primer, high build epoxy intermediate coats and a topcoat of MIO polyurethane. 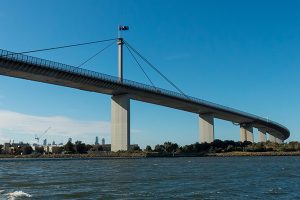